New Classics reviews CDs as well as books and DVD and Blu-ray film releases. The music ranges from Americana, country and rock to jazz, blues, folk, opera and classical. DVDs on review include television, music and feature films, from box office movie hits to film noir and silent classics.

Paul Abraham’s popular operetta, Ball at the Savoy has a plot reminiscent of Die Fledermaus and has won the kind of praise only equalled by Franz Lehár.

A brilliant box set of Saint-Saëns Symphonies features the acclaimed cycle of recordings by Marc Soustro with the Malmö Symphony Orchestra. The set also includes the composer’s atmospheric and dramatic symphonic poems.

The Babadook is a stylish Australian psychological horror film that blends the real and the supernatural in a gripping tale, intelligently written and directed by Jennifer Ken.

A splendid 5-CD Franz Lehár Operetta Edition from OEHMS features popular works by this much-loved composer, including a sparkling performance of The Merry Widow.

A new Blu-ray of Charles Gounod’s pastoral opera, Mireille, by the Opéra national de Paris Chorus and Orchestra has an excellent cast led by Albanian lyric soprano Inva Mula as the tragic heroine, with American Charles Castronovo Castronovo as her lover, Vincent.

You could WIN a copy of   West 11, an exciting crime drama starring Alfred Lynch, Eric Portman and the inimitable Diana Dors. 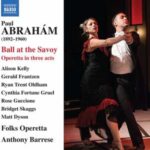 One of Polish composer Stanisław Moniuszko best operas, Halka, has melodic and lyrical music depicting the life of the Polish nobility and highlanders, with spectacular dance sequences.

The third set of CDs in the brilliant  Matchbox Bluesmaster Series features a second volume of music by Texas Alexander, as well as outstanding female blues singers and guitarists such as Ramblin Thomas and Lonnie Johnson.

Romantic Revolution is a fascinating recital by Michael Dussek of music by his ancestor, the colourful Czech composer and pianist Jan Ladislav Dussek, together with two piano masterpieces by Fryderyk Chopin.

The book Android Tablets One Step at a Time is full of sound advice and reassurance, exploring all the features that make owning a tablet such a rewarding experience.

Mariss Jansons conducts the Symphonieorchester des Bayerischen Rundfunks in a live recording of  Bruckner’s Third Symphony. One of the landmarks of the Late Romantic symphonic repertoire is conducted by an outstanding Bruckner connoisseur.

The Spy Who Came in from the Cold has been released on Blu-ray in Eureka’s Masters of Cinema Series. This outstanding espionage thriller is based on the novel by John le Carré and features superb performances by Richard Burton Claire Bloom.

Twelve Harpsichord Suites by keyboard virtuoso and organist Johann Jakob Froberger are played by Gilbert Rowland, one of Europe’s most accomplished exponents of the instrument.

Featuring two of the great popular operas, Cavalleria Rusticana and Pagliacci was recorded at the Dutch National Opera in Amsterdam, with performances by outstanding soloists, including ‘the word’s best mezzo-soprano’ Anita Rachvelishvili.

Whispers and Sighs is a hauntingly beautiful final album by acclaimed American folk singer-songwriter David Olney, with Anana Kaye and Irakli Gabriel. ‘A masterpiece, a parting gift from an imagination of genius.’ – Mary Gauthier.

A splendid box set of six CDs by Marin Alsop and the São Paulo Symphony Orchestra brings together their acclaimed recordings of Sergey Prokofiev’s Complete Symphonies.

A Blu-ray release of two films by Oscar Award-Winning director, John Ford, Straight Shooting and Hell Bent, star the charismatic Harry Carey. These are landmark early films by the master of Hollywood Westerns.

Amy Speace’s album, There Used to Be Horses Here , is revealing, uplifting and deeply personal The songs look back on the year between her son’s first birthday and the loss of her father and shows her knack for vibrant storytelling.

A new release in the excellent series of Russian Piano Trios from Naxos features music by Rimsky-Korsakov, César Cui and Alexander Borodin, superbly played by the award-winning Brahms Trio.

Three new releases from Nimbus explore the music of Thomas de Hartmann. Featuring Elan Sicroff and many other fine soloists, these albums spotlight the remarkable talents of a unique composer.

The fourth volume in Peter Donohoe’s exemplary series of Mozart Piano Sonatas features vibrant interpretations of these works that elegantly capture the essential poetry in the music.

Take Back is an adrenaline-fuelled, martial arts action thriller that offers up a different kind of hero for different times. Gillian White is outstanding as the formidable Zara, finally facing up to her past.

Paul Robeson’s Ol’ Man River is a superb collection from Retrospective featuring 56 of Robeson’s finest recordings – more than two and a half hours of music. A wonderful tribute to one of the twentieth century’s most remarkable and influential performers

Anew  Blu-ray release features an acclaimed performance of Le nozze di Figaro (The Marriage of Figaro). ‘Mozart rebel’ Nikolaus Harnoncourt and the Concentus Musicus Wien are joined by a fine cast of singers including Mari Eriksmoen as a perfect Susanna.

Viy is a haunting 1967 fantasy horror film made in Russia, adaptated from a short story by Gogol, with magical special effects and innovative colour photography. Splendidly restored in this new Blu-ray release from Eureka.

Drot og Marsk is a magnificent opera telling the story of a struggle for power in old Denmark. Composer Peter Heise presents a dramatic power play rooted in love, jealousy and honour, with gripping music and great lyrical beauty.

1847: Liszt in Istanbul is a new CD featuring acclaimed Turkish-American pianist Zeynep Ucbasaran in a recital that celebrates not only great music but also what was Liszt’s final year as a virtuoso performer.

SWR’s re-release of all ten of Richard Strauss’s Complete Tone Poems – as well as his musical epitaph Metamorphosen – as a collector’s item. The fine performances in this exquisite 5-album box set are conducted by Francois-Xavier Roth.

Francesco Cavalli’s sumptuous Baroque opera Ercole Amante (‘Hercules in Love’) features in a lavish production at the Opéra Comique in Paris for this new Blu-ray from Naxos, Cavalli’s extravagant masterpiece is brought magically to life to create a fabulous fairytale atmosphere.

Eric Craven’s Pieces for Pianists collection is the first of two volumes of world premiere recordings available on CD and in HD digital audio. Each of the 25 pieces has its individual charm and miniaturist precision, by turns reflective, ethereal, authoritative and questioning.

A splendid six CD box set from CPO of Telemann’s Grand Concertos features performances for a wide range of instrumental groupings, against the background of an accompanying string orchestra that evidently stirred the composer’s creative imagination most strongly. Michael Schneider and the soloists and musicians of La Stagione Frankfurt perform beautifully, with excellent recorded sound quality.

Roger Corman’s The Masque of the Red Death is based on a tale by Edgar Allen Poe and tells the story of a cruel, degenerate prince who sells his soul to the devil and terrorises a plague-ridden peasantry while merrymaking with his jaded courtiers. Vincent Price gives one of his finest performances as Prince Prospero. Studiocanal has now released this classic in an extended cut, stunningly restored and available on Blu-ray, DVD and Digital.

Dame Evelyn Glennie’s new album, Concertos for Mallet Instruments features Glennie with the City Chamber Orchestra of Hong Kong. The music is ambitous yet thoroughly rewarding and is played by the GRAMMY Award-winning percussion virtuoso with her usual mesmerising mastery.

A new Blu-ray release from Naxos features Sergei Prokofiev’s exciting opera, The Fiery Angel An explosive mix of fantastical realism and endless confusion of nightmares, madness, sexual impulses and cultural clashes, this acclaimed presentation of Prokofiev’s masterpiece sparkles in all its grotesque glory.

The Inner Sanctum Mysteries, a series hour-long feature films starring Lon Chaney, Jr, who plays a different character in each, usually a successful and respected member of the community with an irresistible attraction for women and a knack for becoming involved in murder, often as the chief suspect. This boxed set from Eureka contains all six of Universal’s Inner Sanctum series, available on Blu-ray in the UK for the first time. With great performances and a host of fascinating extras, this is a treat for every classic mystery and horror fan.

Retrospective’s double CD La Vie En Rose celebrates the life and work of the wonderful Edith Piaf with a fine collection of recordings made between 1935 and 1957, all skilfully re-mastered. They include classic songs like the million-selling La Vie En Rose, Hymne a l’amour, and Les Trois Cloches (with her protégés, Les Compagnons de la Chanson). Over two and a half hours of music in all, these evocative performances are timeless and the voice of this tough yet vulnerable woman continues to mesmerise. Formidable!

Joséphine Baker was a vivacious, vibrantly youthful personality who had a most extraordinary life. She became one of the most celebrated performers at the Folies Bergère in Paris, where she caused a sensation when her costume consisted of only a short skirt of artificial bananas. An idiosyncratic, elastic-limbed dancer, she became an iconic image and a symbol both of the Jazz Age and the Roaring Twenties. Dis moi, Joséphine is a definitive CD collection featuring 27 remastered original recordings from Baker’s 30s heyday – the perfect introduction to one of the twentieth century’s most captivating performers.

Acclaimed French-born pianist Hélène Grimaud, together with her creative and life partner, photographer Mat Hennek features in Woodlands And Beyond, an enchanting multimedia concert project that was captured at the Grand Hall of Hamburg’s Elbphilharmonie. Grimaud’s virtuoso piano performance is accompanied by Hennek’s photo series Woodlands, which depicts genuine portraits of trees. With works by romantic and impressionist composers, such as Luciano Berio, Franz Liszt and Claude Debussy, Hélène Grimaud leads her audience into the enchanting world of those various Woodlands and even beyond.

Ludwig van Beethoven was beset with mounting problems in 1802, when his progressive deafness and strong feelings of alienation. During his stay at Heiligenstadt in the summer and autumn of 1802 he wrote testaments in words, and his  Kreutzer Sonata is a defining work for that year. Beethoven’s Testament of 1802 is an immaculately produced SACD featuring the exceptional young violinist Ragnhild Hemsing with Norwegian pianist pianist Tor Espen Aspaas.

His second volume of Daniel Todman’s Britain’s War (Into Battle: 1937-1941) is a triumph of narrative, empathy and research, as gripping in its handling of individual witnesses to the war as of the gigantic military, social, technological and economic forces that swept the conflict along. Hugely ambitious, thought-provoking and lucidly written, this is the definitive account of a drama which reshaped Britain and the world.

‘Unthinking respect for authority is the greatest enemy of truth.’ – Albert Einstein.